Has the ‘church’ forsaken God? 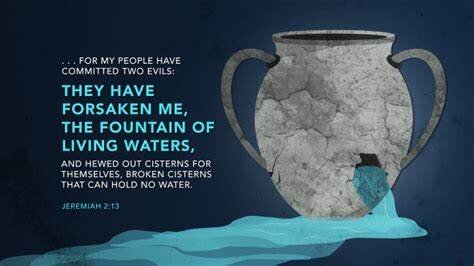 “My people have committed two sins:

They have forsaken me, the spring of living water,

and have dug their own cisterns, broken cisterns that cannot hold water.

In my last blog I wrote about the call of God on Jeremiah to speak judgement to an unholy people – God’s chosen people. These are the very people he had called his bride.

For your Maker is your husband—the Lord Almighty is his name—
the Holy One of Israel is your Redeemer;
he is called the God of all the earth.

Isaiah had also warned the people to return to God. Jeremiah now admonishes them of coming disaster as they continue to forsake their God. We know through scripture and history that the people of Judah did not repent and were taken into captivity – just as Jeremiah prophesied.

Listen to what God instructs him to say: My people have committed two sins:

1. They chose to forsake God – the source of living water

2. They built their own broken cisterns

So what does this mean? First of all – humans are obstinate and foolish. It’s like this.

Imagine drinking the fresh, pure, cool, clear, water from from a mountain stream. It quenches the thirst, provides nutrients to the body and literally sustains life. It revives, replenishes and refreshes

Then imagine drinking the stagnate, lukewarm, bug infested (or rat infested) water of an open cistern. In fact one that is broken and won’t even hold water. The cistern empties, nearly as fast as it is filled. What is left is hardly refreshing and most likely infected with unseen larvae, waiting for the opportunity to bred illness into the human body.

Yet this is what God saying. His people have walked away from the truth of God; the life giving ‘water’ and have chosen to build cisterns of broken systems of religiosity and the culture, putting their faith in things that will not give life and their pursuit of pleasure, will not restore or cleans the spirit, soul, and body.

Let’s fast forward to 2020. We have never seen such a time in all of history. There have been other eras similar perhaps, but they all lacked the incredible technology and communication we have today. People are being ‘led astray’ in droves as they look for greater pleasures in dirty cisterns of new cultural norms.

When I look around and see denomination after denomination caving to sexual compromise and not standing on the truth of God’s Word, I become disturbed. In fact it makes me feel annoyed, angry and frustrated. I want to shout WAKE UP CHURCH from the roof tops.

We need a holy conviction to drive us out of compromise. We need to come back to the truth of God’s Word and not be swayed by false doctrines and the momentary pleasure – and there are many. Not only do we need to anchor ourselves on the truth of God’s word, but we need to preach it from our pulpits and share with our neighbours. We need to be as wise as serpents and as harmless as doves.

The consequence of staying silent about sin is the church being judged and literally going into captivity. Some would say the church in Canada is on the verge of this.

The consequence of speaking up is rejection. Many will deny the truth. This is a time of seeing Romans 1:28-32 in action.

Furthermore, just as they did not think it worth while to retain the knowledge of God,

so God gave them over to a depraved mind,

so that they do what ought not to be done.

They have become filled with every kind of wickedness, evil, greed and depravity.

They are full of envy, murder, strife, deceit and malice.

They are gossips, slanderers, God-haters, insolent, arrogant and boastful;

they invent ways of doing evil; they disobey their parents;

they have no understanding, no fidelity, no love, no mercy.

Although they know God’s righteous decree that those who do such things deserve death,

This is definitely the condition of the world we live in, but we must not allow the ‘church’ to follow suit. We must cry out for righteousness, for purity, for integrity, for the very character of Jesus to be manifest that those who call themselves followers of Jesus, might be a beacon of light in the midst of a church ready to cave to the culture.

← Tired and Inspired! Deepening Your Roots →