The Vision of the White Horse 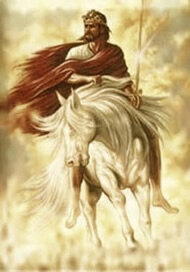 Several years ago I was being interviewed for licensing with a ministerial organization. At the end of the interview the members board of directors gathered around me to pray over me. During this time one of the members had a vision and this is what she saw:

I was standing alone in a field and in the distance there was a white horse coming toward me. As the horse drew near she could see it was Jesus. He slowed the white horse as He approached. Without saying a word Jesus reached down and drew me onto the horse behind Him.

The horse began pawing the ground. It was eager and ready to go. It wanted to run. Once I was security behind Jesus, the horse lifted it’s front feet off the ground. It was beyond ready to move NOW. And move we did as well galloped across the field – Jesus and I together on this beautiful animal.

This vision has never left me and although I didn’t visually see it, if I close my eyes I can image it vividly. It was so powerful and I have pondered it many times. Jesus has rescued me. He has taken me from death to life in Him. He has is my Saviour, Healer, Baptizer, and soon coming King.

This, dream, especially given the context, signified something monumental was about to occur. He had been preparing me for decades and this vision became one of commissioning.

The white horse signifies Jesus return, but in this case was something different – it was a sign of His faithfulness and that he would lead me into battle and that is exactly what he’s done.