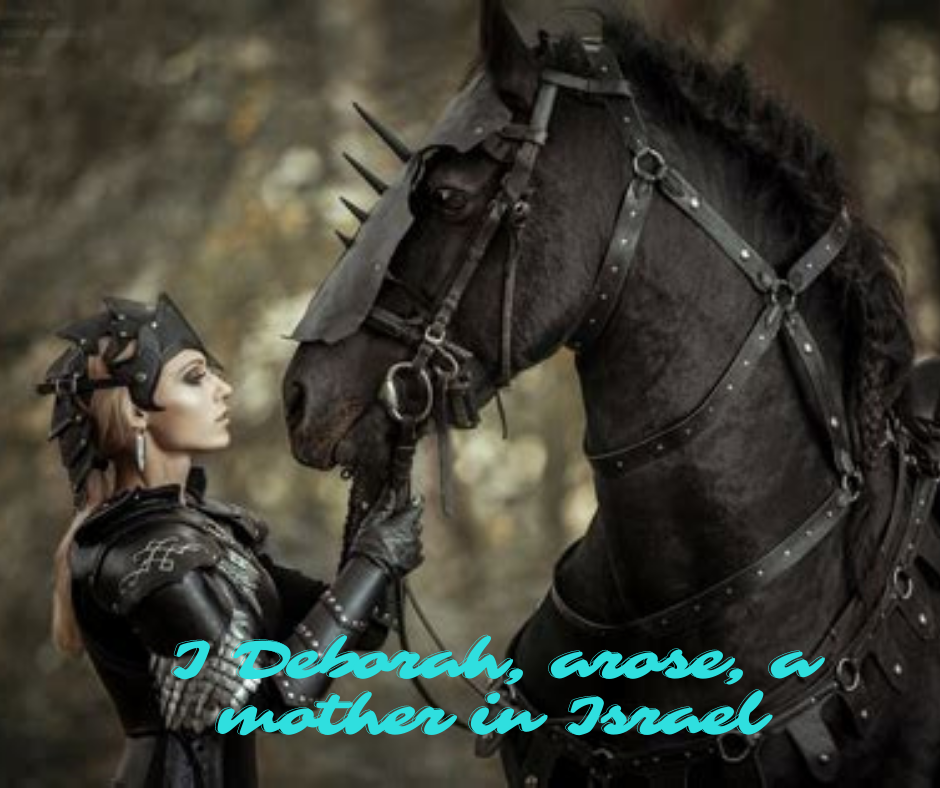 In the days of Shamgar son of Anath, in the days of Jael, the highways were abandoned;
travelers took to winding paths. Villagers in Israel would not fight;
they held back until I, Deborah, arose, until I arose, a mother in Israel.

God chose new leaders when war came to the city gates,
but not a shield or spear was seen among forty thousand in Israel.
My heart is with Israel’s princes, with the willing volunteers among the people.
Praise the Lord!

The above passage is part of the ‘Song of Deborah’. Let’s set the scene. In Judges 4:1-4 we see that

again the Israelites did evil in the eyes of the Lord,

So the Lord sold them into the hands of Jabin king of Canaan, who reigned in Hazor.

Sisera, the commander of his army based in Harosheth Haggoyim,

had nine hundred chariots fitted with iron and

had cruelly oppressed the Israelites for twenty year, until they cried to the Lord for help.

Now Deborah, a prophet, the wife of Lappidoth, was leading Israel at that time…

God called up Deborah, a wise and holy woman, to be a judge and prophetess over the Jew. She was the only female among the 12 judges of Israel. At this time she said to Barak, her military commander: “the God of Israel, commands you: ‘Go, take with you ten thousand men of Naphtali and Zebulun and lead them up to Mount Tabor. I will lead Sisera, the commander of Jabin’s army, with his chariots and his troops to the Kishon River and give him into your hands.’”

Many of you will know the rest of the story when Barak answered, “If you go with me, I will go; but if you don’t go with me, I won’t go.” Deborah agrees then states, “But because of the course you are taking, the honor will not be yours, for the Lord will deliver Sisera into the hands of a woman.”

This is an interesting story, but why is it important? Well I believe first of all it speaks of two types of leaders: those who are willing to obey God and lead no matter the cost and those who, even though called to lead, relinquish their mandate. This is what happened to Barak. He was a military commander; Deborah a prophetess and appointed Judge over Israel was his ‘commander and chief’ so to speak.

The scene set here is certainly disturbing. It seems that although Barak agrees to go to battle, he has a condition -that Deborah accompany him. I find this interesting as she had already stated that she would lead Sisera’s army into Barak’s hands, yet Barak requires more of her. He wants her to lead the Israelites as well. Barak became a reluctant leader. So, Deborah went with Barak to Kedesh where Barak routed the Canaanites, while Sisera fled on foot, only to be killed with by Jael wife of Hebor.

While many people today believe that God doesn’t allow women to lead – this seems far from the case. God had already positioned Deborah as the leader of her people (history provides this example) but she did not desire to lead the army into battle. There is no evidence that she was a seasoned warrior. Yet, here she was with a choice – lead or stay home! She rose to the occasion. She was trusted God.

Many of us are, or have been reluctant leaders in one way or another, but I believe that God is calling forth those, who will rise to the occasion in these turbulent times. He is positioning His people, all across this land.

Most of us are parents – we are called to lead our families. Some are the teachers called to teach our children. Some are in positions of authority either in the community, the church, government or business – we are all called to lead well according to Godly principles. This means that all of us have a responsibility to ‘lead well’ within our sphere’s of influence.

Here is my question for you today: “Are you leading well?”

← There's No Escaping Reality - no matter how you spin it! Lovers of Self →