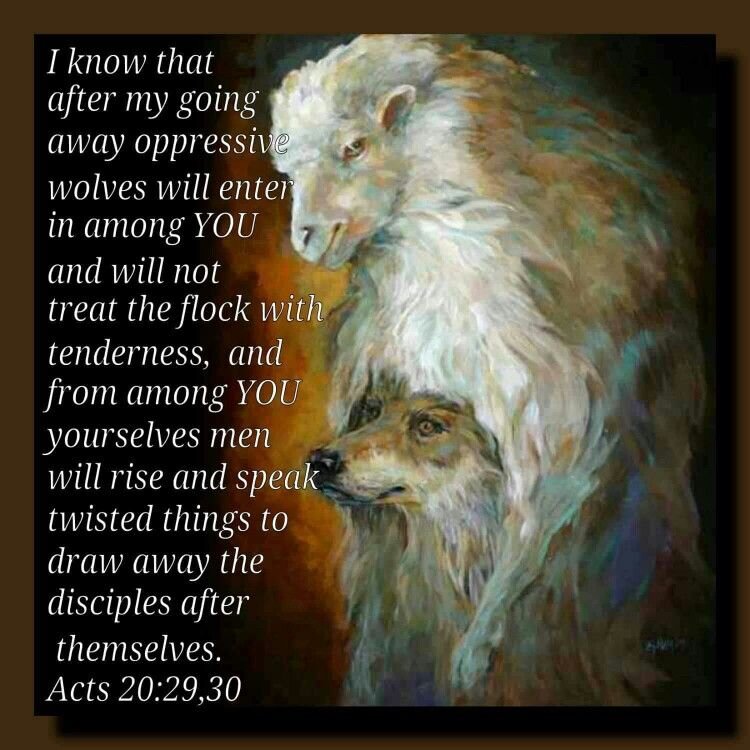 Be on guard for yourselves and for all the flock that the Holy Spirit has appointed you to as overseers, to shepherd the church of God, which He purchased with His own blood.

I know that after my departure savage wolves will come in among you, not sparing the flock.

And men will rise up from your own number with deviant doctrines to lure the disciples into following them.

We live in an era like no other. Voices come at us from all sides, friends, family, media, social organizations and of course, the Church.. Many voices are intent on subjugating God’s word, to bring it under the authority of a cultural mandate, rather than letting the Word speak for itself and bring the truth to which it speaks, into the realm of the authority of Jesus

Christians of all strips now feel they are the authority, rather than letting the Word of Truth embed in their hearts. It is the Word of God that penetrates even the hardest heart to bring about change, incomprehensible change. If we deny that people can change we are denying the very word of God and the ability of salvation to do it’s work in our lives. If we instead decide what is true, or that we don’t like a particular portion of scripture because it might disrupt our behaviour, we are now a society that not only ignores God’s Word, but acts to repress and even alter it.

Let me share these words from Canadian Justice Minister, David Lamenti says this when discussing an the initiative to ban all help for those with unwanted same sex attraction:

▪Conversion therapy is premised on a lie, that being homosexual, lesbian, bisexual or trans is wrong

and in need of fixing.

Not only is that false, it sends a demeaning and a degrading message

that undermines the dignity of individuals.”

Mr. Lamenti is not speaking on behalf of the Christian church (and other religions), but instead bring his rendition of truth brings assault the truth of scripture, in fact the very bedrock of our understanding of male and female, sexual immorality and the uniqueness and dignity of all individuals.

And what do I mean? Well God’s Word is very clear on the subject of sexuality and sin. First of all – none of us is exempt. We have all sinned and fallen short of the Glory of God. Secondly any expression and practice of sexuality outside of a man, woman marriage is declared sinful according to God’s Word.

There is such a misunderstanding of God’s grace, even within the Church. Each of us is created in the image of God – male and female He created us. This gives us divine worth. We are unique and God loves us. But we also know that His Word declares that God demonstrates his own love for us in this: While we were still sinners, Christ died for us (Romans 5:8). He has a better plan for us than living in sexual depravity of any kind and He gives us the ability to repent and turn away from sin.

Although they claimed to be wise, they became fools  and exchanged the glory of the immortal God

for images made to look like a mortal human being and birds and animals and reptiles.

for the degrading of their bodies with one another.

They exchanged the truth about God for a lie, and worshiped and served created things rather than the Creator—who is forever praised.

Furthermore, just as they did not think it worthwhile to retain the knowledge of God,

so God gave them over to a depraved mind, so that they do what ought not to be done. T

hey have become filled with every kind of wickedness, evil, greed and depravity.

They are full of envy, murder, strife, deceit and malice.

They are gossips, slanderers, God-haters, insolent, arrogant and boastful; they invent ways of doing evil; they disobey their parents; they have no understanding, no fidelity, no love, no mercy.

Although they know God’s righteous decree that those who do such things deserve death, they not only continue to do these very things but also approve of those who practice them.

Nothing has really changed in 2000 years. But God wants to grab hold of our hearts and change us from the inside out. In order for that to happen we must agree with what he calls sin. Envy, murder, strife, malice, gossip, slander, hatred of God, arrogance, insolence, disobedience, adultery, sexual immorality and the list goes on.

God’s word brings conviction. When this happens we have two ways to respond: Receive truth and repent; or reject truth and resist God. May each of us choose wisely to walk in the Word daily.

← Rejoicing in Suffering A Spirit of Unity →