Fly the Flag of Truth High 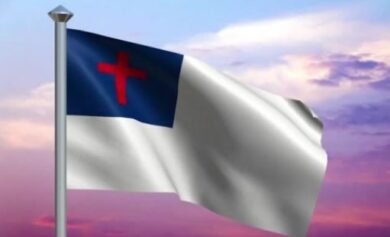 Fly the Flag of Truth High

We fly the flag of truth

Love the truth will rally to it

How sweet it is to know the One who is still on the Throne and in control in the midst of this world filled with chaos and confusion.  Each day as the ‘News’ becomes more sinister, it is important to hold fast to the truth of God’s Word and deep compassion of the love of Jesus.  Our instruction from the Word of God is not to ‘hunker down or hide away’, but rather to engage; to be the light in the darkness and ‘fly the flag of truth‘ so that those who love the truth will rally together.

Some truths to rally around:

Disagreement is Not Hatred

We must not get confused by media or politicians who seek to label all who disagree with their ideas or ideologies, as hateful, racist or bigots.  Name-calling has risen to new highs in Canada, but it is not a time to quit speaking truth just because we are called names.  That is simply an attempt to bully individuals and groups into ‘groupthink’- a lack of critical thought.

The best remedy to speech you don’t agree with, is more speech, not less. The best way to exercise free speech is to use it.  It is more important now, than it has ever been, to share truth in the ‘marketplace.’

Marriage in the Political Forum

Last week, Trudeau and Singh joined hands in an act of formal political collaboration – a contract of sorts.  This ‘marketplace marriage’ will greatly benefit our Prime Minister as he seeks to suppress citizen involvement, and voices who might oppose his ideas and policies he is seeking to implement.  Any questioning of narrative on the issues of transgender ideology, critical race theory, media/government overreach, implementation of a socialist strategy, parental authority, or the national debt must be crushed at all costs – even if it means an arranged marriage.

What this means for Canadians is, when we go to the polls for the next federal election, those of conservative persuasion had better rise up and get behind a leader that will be unafraid and undeterred in challenging the ruling authorities, with an ability to unify Canadians across this country.

Let me introduce you to Grant Abraham.  I have talked with Grant on several occasions and I am greatly impressed by his humility, real world education, problem-solving expertise, and commitment to truth and transparency.  Take a quick look at his 3 minute video, “Fresh Start for Canada”.  Refreshing.

The whispers of hope for Canadians “are being silenced and replaced by a new and disturbing vision of a Canada darkened by skyrocketing inflation, unreachable home prices and a socialist ideology that nurtures dependency on the government; working against the principles of self-sufficiency that built this nation.”1

I invite you to listen as Cathy Peters presents to Tofino City Council.
https://www.youtube.com/watch?v=O4J17k3GOb4

She speaks at timestamp 4:55 for about eight minutes.  Cathy has been on the front lines of battle against sex trafficking in Canada.  It is real.  It is vicious.  It is an insidious evil attacking our unsuspecting children and youth.  It is happening right in our schools.

Stemming from a police investigation of Dennis Perkins, a former Livingston Parish Sheriff’s SWAT team commander, he and his ex-wife Cynthia Perkins face a combined 150 counts of child sex crimes. Their level of disgusting deviancy included charges alleging they raped two children (adopted children) and an adult, produced child pornography, and served schoolchildren baked goods on which Dennis Perkins had ejaculated, among other alleged crimes.

So here’s the reality: both Dennis and Cynthia had powerful and respected government paid positions.  They, especially Cynthia, had daily access to children whom they habitually abused.  But they did not act alone.  Melanie Curtin, also a police officer, was accused in a separate case, of helping former deputy Dennis Perkins record a 17-minute video showing the rape of an unconscious victim in 2014. [1]

Media sources were abuzz last week as Lia Thomas and Rachel Levine, two transgender women — i.e. biological men — attempted to school women on how to be female. Of course, Big Tech platform have been equally busy locking out critics.  While the ‘woke’ continue to constantly confuse biology with ideology, the young women who have spent years working hard to compete, and who have participated in regular competitions against their peers, are set on the sidelines to watch, as a man takes their medals!

Not only this, but such men are allowed in the same changing rooms, even though they still have their male parts intact, and are attracted to females.  This is perhaps the worse tyranny of all; subjecting our young women to unprincipled men who have no qualms about nakedness in female-only spaces. This is jeopardizing the girls’ sexual safety and violating their privacy.

WE cannot stay silent.  The very core of womanhood is being annihilated and the world is celebrating.  If you have not yet read Abigail Shrier’s book, Irreversible Damage: The Transgender Craze Seducing Our Daughters, now would be a great time. It no longer seems to be available on Amazon!

Let me close with what I began with. The best way to exercise free speech is to use it.  It is more important now than it has ever been, to share truth in the ‘marketplace.’  Don’t back down from truth.  Keep reaching out. Keep calling and emailing your political leaders.  They need to be held accountable.  Never give up your rights as a parent, grandparent or citizen, to speak up for the children.

← Salt and Light in a Confused World Interview with Shannon Douglas, father and advocate for truth (Featured Interview) →